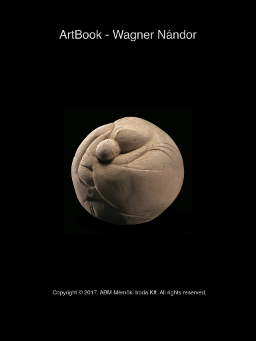 The ArtBook - Wagner Nándor digital fine art album presents the art of sculptor Nándor Wagner through his biography, more than 110 images of his works and a study of Tibor Wehner.

Nándor Wagner sculptor was born in Nagyvárad, on 7th of October, 1922. He attended school there and later studied sculptural arts and painting at Academy of Fine Arts in Budapest. He evinced of his talent for drawing, creating objects and designing furniture as well at this early age.
After the war, he settled down and worked in Hungary. He gave courses in art in his studio at Ybl Bazár to talented students who were refused to enter universities before the 1956 revolution. After the Soviet army suppression of the Hungarian Revolution he had to leave Hungary and Sweden received him and his family. Soon he established his studio in Lund. Here at the Academy he met Chiyo Akiyama art student who became his wife and partner for the rest of his life. The third period of his life started in Japan in 1969, where his art opened at full scale. First the Wagner couple built a studio by themselves in Mashiko Tochigi ken, primarily known for its local pottery Mashiko ware.
He passed away in Moka near his studio on 15th of November, 1997. The place for his grave was selected and prepared by him in the garden of his Mashiko studio.

The ArtBook fine art album is a digital book: it consists of chapters and it is as readable as the traditional books. You can turn pages back and forth using the well knows gestures. The technology allows to see the objects from multiple perspectives and to open the images in full screen size. The catalogue of the works can be filtered in a userfriendly way by different criteria, visualizing the images of the selected works only.

The app was developed with the support of the Foundation Academia Humana.

Back to the main page